Growing up around my grandmother, Katharine Stowell and her creative friends  who often got together to create in her sun porch in Tampa, Florida, I learned to paint, assemble, sew, knit, embroider, quilt and appliqué using various materials to create my own clothing.   My grandmother would cut beautiful fresh flowers from her garden arranging unusual combinations. I was in awe bemusing myself with their colors and fragility, often drawing their images and plucking their petals to glue  on my down on my  paper.  Thus roses and flowers began to emerge in my own drawings and embroidery.

I have always been fascinated by colors, costumes and theatrical images.   My Dad, B.J, Brown, often took the family to see Ringling Brothers and Barnum Bailey Circus, whose winter head quarters were located in Sarasota, Florida.  The circus people practically lived around the corner and I was enthralled by their bright and shiny costumes!  Clothing and color combinations that I had never seen before left me gasping for more!   Thus, when the circus came to town, I was constantly gathering up ribbons and laces to embellish my clothes before we went.  I was determined that if I could not join the circus I could certainly wear some of my own artistic clothing.  My Mother, Katharine Weekley Barker, was always encouraging my creativity until the day, she notice her Elvis Presely 45 records, were missing. I had taken them outside into the hot Florida sunshine and had melted all these treasures to make ashtrays, though no one smoked in my family. She then discovered her jewelry glistening outside on the sidewalk. I was fascinated by the sparkles from the sunlight and was quick to notice the difference between costume jewelry and my mom’s good stuff. Hence, the beginning of creativity……… 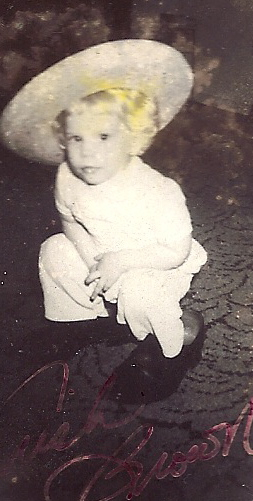 Published in 13 Stampington Press publications: Altered Couture, featured in Apron.ology 2011-2012 and being the cover girl of Apron.ology 2013, Belle Amoire Jewelry, and Belle Amoire Art and Fashion. Trish was also featured at the California Center for Arts, Escondido and in 2009 featured in Escondido’s Fashion Week Trunk Show. Her artwork, jewelry and clothing line has been collected by Museums, Galleries and Private collections.

Trish Vernazza, M.A., MFT, the author of “Women, Art and Mental Illness” practices Art, Art Therapy, Licensed Marriage Family Therapy. Trish is a 9-time recipient of Who’s Who of American Women, a 6-time recipient of “Who’s Who in America”, and 4-time recipient of Who’s Who in the World. She chaired and Co-Chaired V-Day, Vagina Monologues for NCAAWA, 2010, 2007, and 2006 with producing the cover artwork for the program. She was also was honored with a grant from Serpent Source Foundation for Women, San Francisco and Hillsborough County Artist Grant. Trish is an American Art Therapy Ambassador, CAMFT Elections Committee, and Media Spokesperson. Trish has also appeared numerous times as a guest expert on NBC’s reality TV Show “Starting Over” along with representing CAMFT on KUSI News, San Diego.