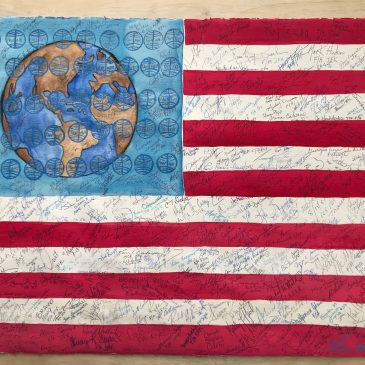 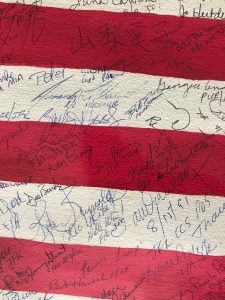 A tribute to Pan American World Airways (10/19/27 – 12/4/91), signed by my fellow flight attendants and the pilots. As an international flight attendant, I was based out of JFK and flew mostly Europe and South America until they ceased operations. As I knew the time was coming to an end, on my days off, I created the flag and kept it at the Flagship Terminal/JFK quarters. As people checked in for their flights, they began to sign the flag knowing it would soon be a memory.

In an era dominated by flag carriers that were wholly or majority government-owned, it was also the unofficial overseas flag carrier of the United States.

It was an honor to be an international flight attendant for PanAm as it was such an historical classic airline and my fellow crew-members came from such diverse cultural backgrounds. When I wasn’t working, I was hopping flights with my friends and always exploring museums, historical landmarks, churches, bookstores, and making friends all over the world. I was thirsty for culture.